Chocolate in all its variations is probably the most delightful of all sweet treats. Easy to carry, easy to store and incredibly teasing. Today you can buy it pretty much everywhere with an incredible variety of different forms and flavours. While so many people consume chocolate every day, few actually ask themselves where it comes from and how it is made.

In Cologne you can visit a museum called Imhoff Lindt Chocolate Museum, where you can learn about its history, origins, traditions, culture and the whole production process. A live and functioning production line for the very same chocolate candy you are handed on the entrance is working inside. The museum maintains itself without any public funding or subsidies and is one of the few that manages to do so. A part from its founder Imhoff, it is today named by the prestigious Lindt chocolate brand, while it was originally entitled to the world famous Stollwerck brand originating in Cologne.

At the beginning of the 20th century, chocolate was still sold mainly in “colonial stores” or “specialty food stores”. It is made using fermented and roasted cocoa beans. This bean is actually the seed of the cocoa fruit which has a yellowish outside and a bright white pulp. The fruit itself has really nothing in common with what we eat as chocolate and is mostly thrown away during the harvesting process. A real pity since the fruit pulp is an excellent source of natural vitamins and mineral such as vitamin B1 and B2. 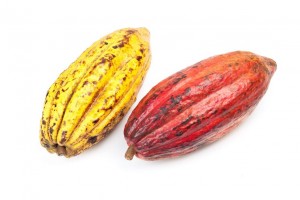 To whom is curious about trying the pulp of the cocoa fruit: there is a company which imports deep frozen cocoa pulp and distributes it all over Europe. Check it out on www.acai.eu

In the diffusion of industrial chocolate products throughout western markets, Cologne played an important role due to Frank Stollwerck, one of the most successful entrepreneurs in the 19th century chocolate business. He set up shop in the southern part of town in 1839 as a baker. From here he diversified into candy and chocolate production. He also marketed cough drops very successfully. His business grew successfully and very quickly. After opening two coffee houses he converted one to a small chocolate factory. After his death in 1876 his sons turned the company into a multinational corporation with production facilities in Europe and America. In 1902 the company went public and was by then the second largest chocolate producer in America, before consequences of World War I and the Great Depression strained its finances.

In 1930 it was saved by Deutsche Bank from bankruptcy, but it was from then no longer a family owned business. After World War II the company was facing severely damaged production facilities and much of its equipment was taken away for war reparation payments. Nevertheless finally in 1949 production restarted, but the company performed mediocrely in the 50s and 60s. Poor strategy and under evaluation of competitors such as Dr. Hans Imhoff were the main reasons for its not being able to return to the glorious success it once had.

Amazingly, Dr. Hans Imhoff was born in 1922 right next to the large chocolate factory in Cologne. He grew up with the sweet scent of chocolate production in the air, dreaming of producing it himself one day as a little child. Not only did he become Germany’s first self made millionaire after WWII, but he also bought the large Stollwerck corporation off Deutsche Bank in 1972, after already having build a very successful sweets and chocolate factory in Bullay, in the south east of Germany since 1948. Under his leadership the company rebuilt its original glory and became once again market leader in Germany. In 1975 while transferring production to a new facility, Dr. Imhoff decides to build the first ever chocolate museum. Ever since it opened doors in 1993 the Imhoff Stollwerck Museum has been one of Cologne’s most important tourist attractions, drawing thousands to the city every year. It was the very first of its kind. Before retirement Imhoff sells the Stollwerck corporation but keeps the museum which is run by his wife since his death in 2007.

Dr. Imhoff not only lead an amazingly successful life. As a true capitalist he also engaged in numerous businesses and passionately gave back to the community financing or donating to numerous social and cultural initiatives. The most vivid and visible monument of his passion for cocoa and chocolate production remains the amazing chocolate museum in Cologne. It is definitely worth a visit to learn a lot about chocolate.

What about you? Have you ever been to a chocolate museum?

wBounce is succesfully installed and triggered.

Now go ahead and set up your own modal.